When attackers threw acid in Shamsia Husseini's face outside her school in Afghanistan, she defied them by returning to class -- and now she has scored another victory for female education by becoming a teacher herself.

Shamsia suffered severe burns on her eyelids and cheeks in the November 2008 assault, which generated global publicity, with then US first lady Laura Bush condemning it as a "cowardly and shameful" crime.

Afghan President Hamid Karzai vowed to hang the men who had attacked Shamsia as she walked to the all-girls' Mirwais Mena school on the outskirts of Kandahar city.

One man, wearing a mask, asked Shamsia if she was going to school. Then he tore off her veil and pumped acid from a spray gun onto her face.

Several other pupils were hurt in a series of similar acid attacks that morning, but Shamsia and her friends refused to abandon their lessons and persuaded their reluctant parents to support the school staying open.

Five years on, Shamsia, now aged 22, is still in the classroom -- but now she stands in front of an energetic bunch of nine- and 10-year-old girls.

"The students sometimes play around and it does test my patience," she admitted to AFP with a smile. "But being a teacher is much better than being a student, and I am now studying to become fully qualified."

'The attackers did not win'

Shamsia's scars eventually healed after treatment at hospitals in Kabul and New Delhi, though she has recurring problems with blurred vision and eye pain.

"It was very important for me to become a teacher as it shows people that the attackers did not win, just like we came back to school after the attack," she said.

"By teaching, I want to show that education is important and that women can do more than work in the kitchen." 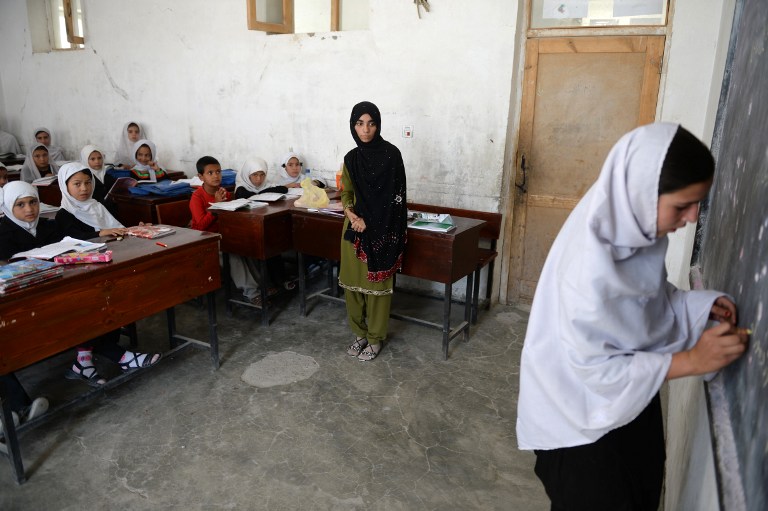 Shamsia Husseini (C) looks on as one of her students writes on the blackboard. ©AFP

Shamsia retains the quiet determination she displayed when speaking out over the attack, and she remains furious that her assailants have never been punished.

"President Karzai promised to hang these men. If I ever talk to him, I will ask him why he failed to do that," she said.

The Islamist Taliban, who banned female education when they were in power from 1996-2001, denied any involvement in the acid strikes, and nine suspects arrested after the attack gave questionable confessions and were later released.

Shamsia even says that one of her attackers lives close to her home, and that he sees her go to school every day.

"He is free, and it is possible it could happen again. There is no justice, he needs to be punished," she said.

Inside the school, built with Japanese aid money and opened in 2004, classrooms are packed with chirpy girls aged between six and 20, all wearing white headscarves and shooting their hands up in the air to answer their teachers' questions. 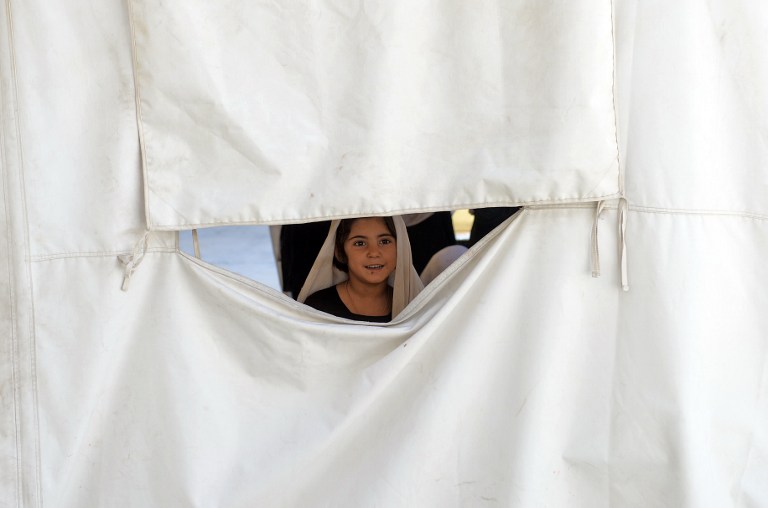 A schoolgirl looks out from their classroon in a tent at Mirwais Mena school. ©AFP

More than 2,600 pupils attend lessons in two daily sessions, but many others are turned away due to lack of space even with tents donated by UNICEF being used as makeshift classrooms.

Shamsia, who earns $85 (63 euros) a month, teaches art and handwriting to her fourth-grade class, while older girls have lessons in science, geography and mathematics.

Kandahar, situated in the south in the Taliban heartland, remains one of the most conservative parts of Afghanistan, 12 years after the Taliban hardliners were overthrown.

For the girls at Mirwais Mena, life after they leave school will likely be restricted to the family home, with rare forays outdoors only if cloaked in an all-enveloping burqa.

"We had to work hard to convince parents not to withdraw their children after the attack," said headmistress Danesh Alavi, who was deputy principal at the time. "I remember the anarchy of that day, the panic and fear.

"Shamsia is from a poor family, but her serving as a teacher is a lesson to other girls to be brave and to help develop the country. Young girls can see her be a teacher and understand this.

"Like any good teacher, she is kind to her pupils and is always on time." 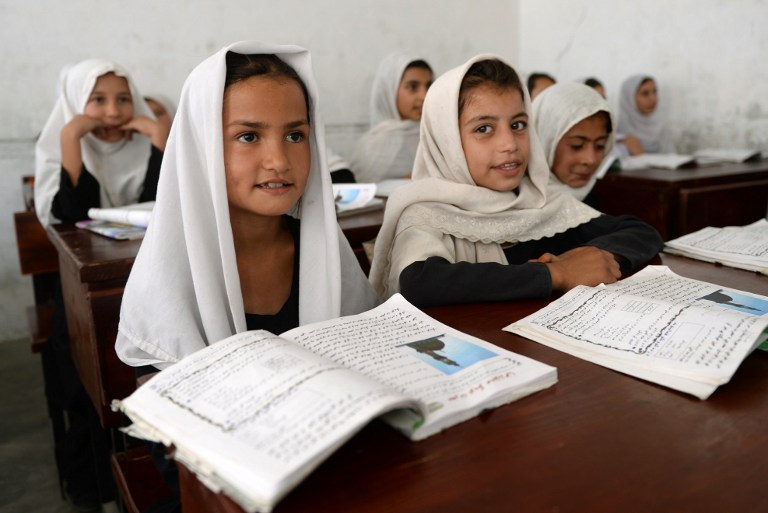 Schoolgirls listen as they sit in Shamsia Husseini's classroom. ©AFP

For two hours each day, Shamsia also joins a class of female junior teachers who are preparing for their qualification exams.

It is too dangerous for them to travel to teacher-training college in Kandahar city, so Bahir Makimi pays his own bus ticket to come to the school.

"I think Shamsia is a good teacher already and will get better," he said.

"But we have no proper facilities to advance teaching skills here. We improve their knowledge of chemistry and other subjects, and we help them to communicate properly with their students."

Western and UN diplomats often cite the introduction of female education after the fall of the Taliban as a central achievement of the 12-year military and civilian intervention in Afghanistan.

There are now about 2.4 million girls in primary and secondary education, and 51,000 female teachers, according to UNICEF.

But the lack of classrooms and teachers, as well as early marriages, are holding numbers back, and fears are rising that progress is under threat as US-led NATO combat forces prepare to leave Afghanistan next year.

"I remember the attack on me and the pain," Shamsia said. "Education of girls and having female teachers is so important for the future, to show parents and everyone what we can do."

By Ben Sheppard from AFP