Can a lollipop wrapped in a Bible verse help people come to Jesus? Can a piece of chocolate bring a moment of bliss? Or how about just a bit of comfort after a bad day? A riot of colors, flavors and familiar characters filled the floor of the Sweet and Snack Expo in Chicago as manufacturers competed for crowded shelf space in an ever-growing market. Angry Birds, the Avengers and even Andy Warhol graced the packaging of those who could afford the licensing fees. Others relied on clever or unique marketing to stand out. One veggie sticks snack maker cleverly called itself "Hi I'm Skinny" and splashed the name across its cheerful bag. Specialty chocolate maker Wild Ophelia offered funky flavors like beef jerky and peanut butter and banana. Then there were the hunks of hand-crafted jaw-breakers called ChocoBoulder that look like delectable rocks. 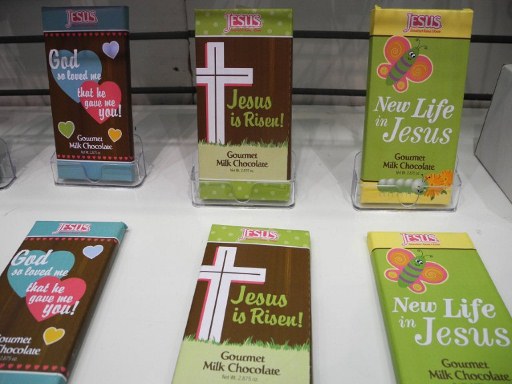 Inspirational cnady bars on display at the Scripture Candy booth at the Sweet and Snack Expo. ©AFP

Scripture Candy aims to use moments of sweet indulgence to preach the gospel. "Our mission is to reach the world one piece at a time with the word of God and it just happens to be on a piece of candy," founder Brian Adkins told AFP. "We know people have come to know Christ as their savior by reading it." One of the company's best sellers is the Jelly Bean Prayer, which offers prayers for each bean color such as: "Black represents my sinful heart keeping me from you above" and "White shows the cleansing of my sin as I put my faith in Thee." It's the more subtle treats like tins of peppermints with the word Jesus made out of candy canes that have helped Scripture Candy expand beyond Christian bookstores, Adkins said. "The main market was a bit slower because they were afraid of offending people," Adkins told AFP. But once retailers realize how quickly Scripture Candy's products fly off the shelves they soon order more, he said. 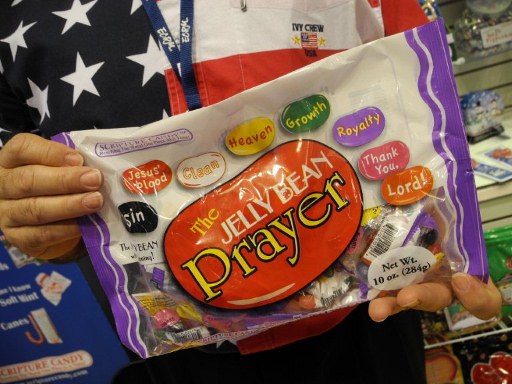 Sales of chocolate, candy, and gum topped $32 billion (24 billion euros) in the United States last year, up from $27.4 billion in 2007, according to the National Confectioners Association. The snack market -- cookies, chips, popcorn, beef jerky, nuts, cereal bars -- is even bigger, estimated to be nearly $50 billion a year. Competition is fierce: there were nearly 5,000 new products introduced last year and plenty more coming out soon. "You have a lot of stuff that my eight-year-old nephew would like because it has toxic on it and bright colors and sour balls and all those types of things," said Kate Shaw, a spokeswoman for the confectioners association. Shaw was referring to a brand of candy called Toxic Waste which is incredibly sour and a huge hit among children. Mixing sweet and savory -- like chocolate covered pretzels or cinnamon popcorn -- remains a popular trend and there also been a real focus on developing more healthy snacks, Shaw said. A big trend has been the expansion of the gourmet market, she said. "People are trying to save money these days, but indulging in some expensive chocolate is something people are willing to do -- it's a way to treat yourself and kind of get a taste of luxury without spending for the big trip," she explained. 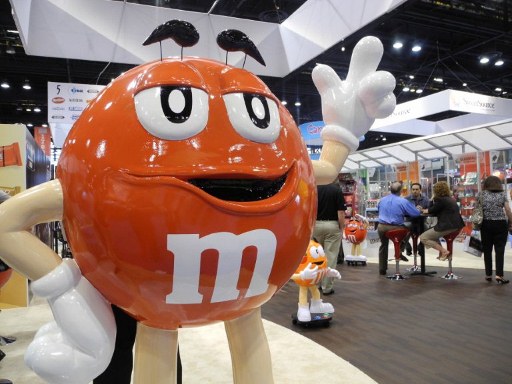 A giant M&M's character displayed at the Sweet and Snack Expo. ©AFP

"We're seeing our members really take advantage of that in the sense that they're coming up with these really indulgent almost seductive flavors." For snack giant Mars -- which counts M&Ms, Snickers and Wrigley gum among its brands -- success is a careful balance of reinforcing good memories and coming up with new twists on a familiar theme. "In this economy people are looking for simple pleasures in life and these very favored brands -- the M&M milk chocolate candies, the Dove milk chocolate and the dark chocolate resonate well with consumers," said Tim Quinn, vice president for trade development. "It takes them back to a place where there is comfort and familiarity." by Mira Oberman from AFP