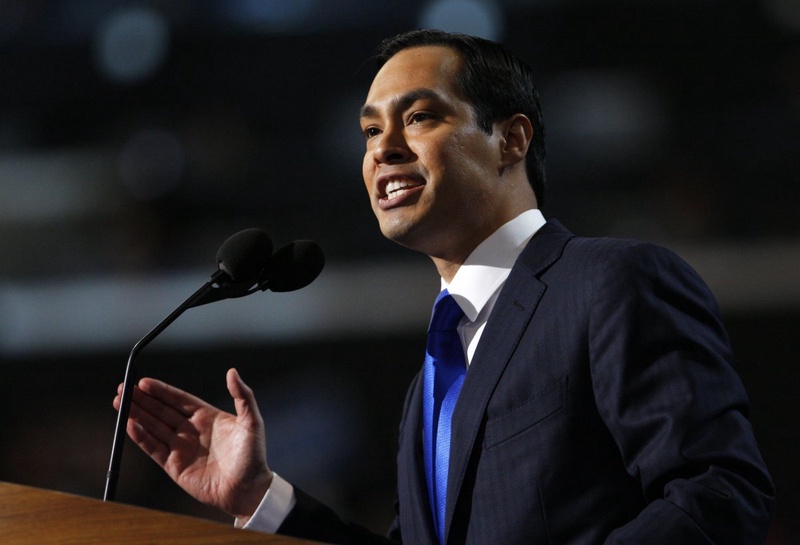 Keynote speaker and San Antonio, Texas Mayor Julian Castro. ©REUTERS/Jessica Renaldi
A telegenic young Texas mayor billed as a Latino Barack Obama in the making, Julian Castro, bounded on to the world's brightest political stage Tuesday, the first Hispanic to give a keynote speech at the Democratic convention, AFP reports. The 37-year-old mayor of San Antonio, the second-largest city in the Lone Star State, told his family's personal rags-to-rich story, the embodiment of the American dream. Ahead of the speech -- the most important of his political life -- he told AFP there were a few butterflies. "Of course, I'm a bit nervous but I know that when I walk up there I'll be ready for it," Castro said. In the end, his performance brought adulation from the party faithful and complimentary comparisons to President Barack Obama, whose speech at the 2004 convention catapulted him toward the White House. Julian Castro played down comparisons between himself and Obama, whose 2004 keynote speech to the Democratic convention was seen as an important springboard for his presidential ambitions. "I would not put myself in the same league as President Obama," he said. "He is somewhat of a unique talent and abilities. I'm a mayor of a city. I'll try to be myself tonight and do a good job." Castro, a second generation Mexican American, whose mother was born like him in San Antonio, said it was flattering to be talked about as potentially the country's first Hispanic president. "I'm confident that that will happen in time but it's not going to be me," he said. "That's not what I'm aiming for. But I do think the United States is ready." Despite protesting to the contrary, Castro has several similarities with Obama: both were raised by single mothers and studied law at Harvard, both have huge electoral potential as flagbearers of large ethnic constituencies. The White House drew parallels between Obama's story and that of the young Democratic mayor from the South, who ticks several of the right boxes to be considered a very interesting prospect as a presidential candidate. His story "reflects the president's story and the American story -- if you work hard, play by the rules, this is the land of the opportunity, you can get a fair shot and a fair shake," said Obama campaign spokeswoman Jen Psaki. Castro, who married wife Erica in 2007 and has a three-year-old daughter Carina, speaks only a little Spanish but he dabbled a bit on Tuesday, using one phrase, "que dios los bendiga" (God bless you), as a staging post throughout the speech. First elected mayor of San Antonio in 2009 and re-elected in 2011 with almost 83 percent of the vote, Castro said the Latino community was "enthusiastically supportive" of Obama. In a historic development in July, the president suspended the deportations of young illegal immigrants under 30 who came to the United States before the age of 16. The plan was largely welcomed by the Latino community and analysts say it could boost Obama's chances for re-election on November 6. "Latinos recognize that Obama's invested in education so that more Latinos can access Pell grants and afford college," Castro told AFP. "The Affordable Care Act has made it possible for nine million Latinos to get health care coverage. That's a huge deal." Obama has also called for the so-called DREAM act -- a bill that aims to lead young illegal immigrants to permanent residency that has been blocked by his Republican opponents -- to be given another chance in Congress. There are 11.5 million illegal immigrants living in the United States, mostly of Hispanic origin, and efforts to deal with their status have foundered over sharp political divisions. Polls show Obama enjoys a big lead over Republican rival Mitt Romney when it comes to Hispanic voters. It is estimated they will number more than 12 million in November, showing the enormous emerging clout of the Latino community. Castro was introduced on stage by his identical twin brother Joaquin who is running for a seat in the US Congress in November.